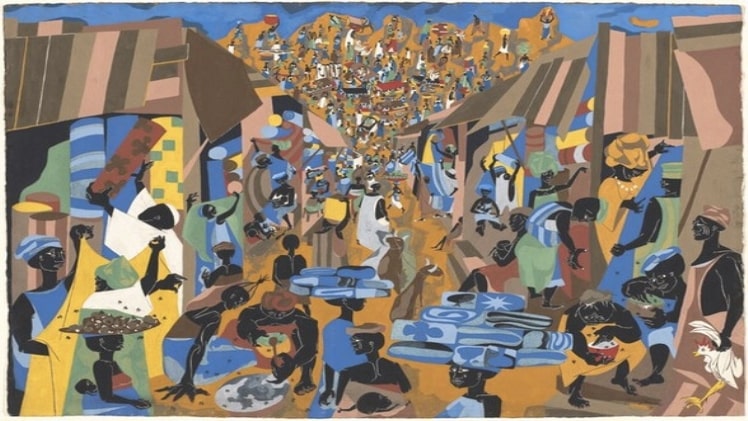 Art has forever been a fantastic way for people to express themselves fully and freely. Unfortunately, however, it has also been used to bring the injustices and inequality rampant throughout the world to the attention and forefront of the masses.

There is no better instance of this than in the history of African-Americans in the United States. For generations, black people were oppressed, marginalized, and ridiculed, with no own voice. Through art such as painting and music and equal rights movements, their suffering was eventually given a voice to speak out with.

Over the years and throughout the many struggles, African-American artists have become some of the leading and most successful figures in society. This success has led to many famous black artists being able to pay tribute to their past. They also help lead society into a future of total equality and tolerance.

Street to Mbari by Jacob Lawrence

Jacob Lawrence is among the most well-known African-American painters of all time. His style was seen to most closely resemble cubism, although it was undeniably colored and shaped by the flavored African culture around Harlem at the time.

A member of the Harlem Renaissance art movement, Lawrence’s famous African Paintings covered a range of topics such as war, migration, poverty, historical events, and the daily lives and struggles of African Americans in New York at the time.

His one of the famous black paintings created in 1964 titled “The Streets of Mbari” conveys a colorfully vibrant scene of the Nigerian market street and beautifully highlights all of Lawrence’s style and messages. He was a big proponent of people’s freedom, dignity, and the social components of society, and all these themes are lovingly displayed in this jazzy multicolored painting.

Of all the African-American artists, Charles Robert Searles was perhaps one of the most in touch with his African roots. He spent an extensive period studying art in different parts of Africa, and when he returned to America, he created a series of paintings that he aptly dubbed Nigerian Impressionism.

This African influence can be seen throughout his body of work, with African masks, drums, and dancing making regular appearances. You can find no better piece of this than in his most famous piece, the 1974 painting titled “Celebration”.

It is a large mural piece filled with lavish layers, vibrant festivity, and color. The mural is also littered with masked dancers, a chorus of drummers, and tribal motifs. No doubt, it is a beautiful tribute to Searles’s African roots and the very roots of art itself.

Land of the Lotus Eaters by Robert S. Duncanson 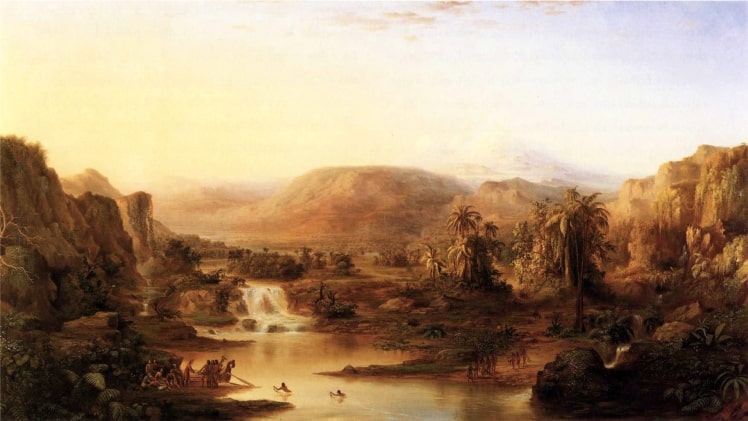 Robert Seldon Duncanson was considered one of the greatest painters of his time, regardless of color. Surviving during the time of slavery in America, Duncanson was a free black man and used much of his art as a tool for the abolishment of the inhumane slave trade.