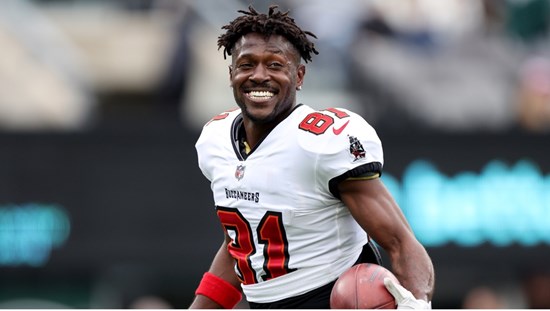 Brown has played for over a decade with the National Football League (NFL), but has been a free agent since being released by the Buccaneers in January. Since the start of his professional football career in 2010, he has built himself an empire worth over $100 million.

Brown has had incredible success in the business world as one of the highest earning investors in NFL history, from his various ventures and connections.

In his professional career, Brown amassed more receptions than any other player in the league from his rookie season in 2010 through 2018, earning him more than $100 million from contracts with multiple NFL teams including the Buccaneers, Raiders, Patriots and Steelers.

During and after his time in the NFL, Brown has made his way into several industries which continue providing him with the capital that will make him a top investor.

Music
In 2019, Brown launched his own record label, becoming the CEO of CAB Records at 31 years old. Later that same year, he inked a distribution deal with Vydia Distribution, which pays him $5 million per year to drop his new music on their platform.

In January 2020, Brown debuted his first single, “Whole Lotta Money,” along with the music video that has since surpassed 4.6 million views and 10 million global streams.

Business
Boomin Productions is Brown’s multi-million dollar brand that includes many different avenues of business, including entertainment and licensing. Since February 2022, Brown has been President of Kanye West’s sports fashion line within his creative content company Donda Sports.

Real Estate
Brown began his own real estate company called Boomin Estates a few years ago to start investing in properties. It was named after his trademark catchphrase, “Business is Boomin.” He also partnered with one of the richest athletes in the world, Floyd Mayweather, to invest in commercial real estate projects. Brown also owns the Florida gym, 84/7, along with 5 homes throughout the U.S.

Television
On March 8, 2016, Brown was announced as one of the celebrities who competed on season 22 of Dancing with the Stars. He was paired with professional dancer Sharna Burgess. The two were eliminated during the semifinals of the show and finished the competition in fourth place overall.

On January 2, 2019, Brown took part on the first season of The Masked Singer as “Hippo” where he sang “My Prerogative” by Bobby Brown. He was eliminated in the first episode.

Get Customers Back Using This Growth Marketing Strategy!