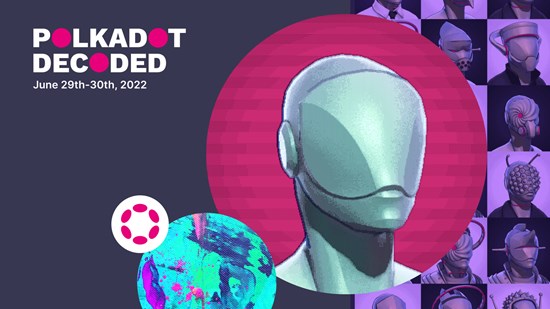 The spectacular summit features in-person events in four major cities, numerous side events plus various parties in which people will gather to watch a rolling live stream featuring all the key presentations from more than 100 speakers.

The venues in all four host cities are fast approaching capacity, such is the eagerness of the Polkadot community to connect and learn more about the ecosystem.

Official event supporters Web3 Foundation and Parity Technologies are now urging all those eager to catch the talks in real time to register for the online streams in advance.

When each attendee accesses the official live stream on the first day of Decoded, their NFT will evolve, completing a stunning, unique metamorphosis.

Not only have W3F and Parity put the wheels in motion to deliver this innovative NFT experience, they have also fine-tuned the event to help deliver an unforgettable community-focused summit for all attendees.

Bertrand Perez, CEO of Web3 Foundation, said: “We value our supporters across the world and encourage the local Polkadot communities in all countries to organize their own events.

“These events could include social gatherings, panels and networking events. Or you could consider hosting an event to allow people to gather together to watch the live streamed talks.

“With such a huge volume of talks scheduled, covering every aspect of the Polkadot and Kusama ecosystems – and with many of their respective parachain teams featured – there really is something for everyone.”

Many cities involved in Decoded

In addition to the four main in-person venues, many other cities are involved in Polkadot Decoded.

Some communities have won the rights to host official side events for their local supporters through an on-chain voting process.

But there will also be numerous non-official gatherings too so that people can watch the live streams together.

The first two editions of Decoded were confined to online streams only due to pandemic measures – so the community is more eager than ever to make the most of the relaxed rules.

Polkadot Founder, Dr Gavin Wood, is scheduled to speak to audiences in both New York and Buenos Aires.

Buenos Aires is now the main location for the wider Latin American audience within Polkadot, and attendees will be gathering at C Complejo Art Media in the Argentinian capital’s central Chacarita district. This is a fashionable new arts and culture complex housed in a converted metal works. Talks will mostly be in Spanish and address aspects around community building, social networks in the age of Web3 and the future scope of NFTs…