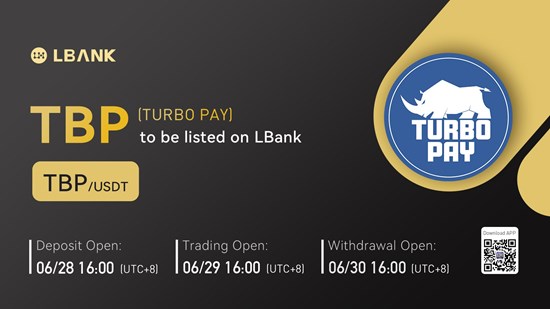 As a smart pay system integrated with blockchain technology, TURBO PAY (TBP) creates an ecosystem that generates profits and shares the value with its users through its NFTs and Metabus IPs, including animation, movies, games, and more. Its native token TBP has been listed on LBank Exchange at 16:00 (UTC+8) on June 29, 2022, to further expand its global reach and help it achieve its vision.

TURBO PAY is an ecosystem with an entertainment securities equity platform for users around the world, and it creates great interest in the ecosystem by continuously generating profits with a sustainable blockchain and value sharing mechanism. TURBO PAY also owns a number of NFTs and Metabus IPs, including animation, movies, and games.

SPL Group, the parent company of TURBO PAY, has launched 10,000 kinds of its own patented character products, owns a total of 500,000 domestic and foreign sales agencies, and distributes and sells them directly. In addition, the O2O business, which builds an independent content distribution network that distributes self-produced animations through simple QR codes, and which leads to consumption of Metaverse and NFTs, will continue to increase the value of TURBO PAY and maximize profits in the future.

As a key digital asset of an entertainment securities-type blockchain ecosystem platform, TURBO PAY enables users to build NFTs and Metaverses based on the rich IP of the parent company that has been leading the animation and character market for more than 25 years. In addition, TURBO PAY expands and develops self-developed intellectual property content and provides the capacity to maximize the value and advantages of animation and character entertainment as a digital asset that can be used not only in NFTs and Metaverses, but also in the game ecosystem, thereby enhancing the competitiveness and sustainability of the ecosystem.

To this end, in the second half of 2022, the Turbo Core Team will release robot animations such as The-Gunbot and Great Q-bot, the first battle system transformation robot animations built on Turbo digital assets. It is a pipeline in which animation, film, and games are linked, and the entire work is composed of a series, and it is composed of 10 works of masterpiece feature series system, inspired by imagining another four-dimensional planetary world and the common world of the earth.

The team is conducting the industry’s largest in-house content project that is exclusively linked to TURBO PAY, and has also started developing TURBO’s applications. In the future, TURBO PAY will be…