DOTORI (DTR) Is Now Available for Trading on LBank Exchange 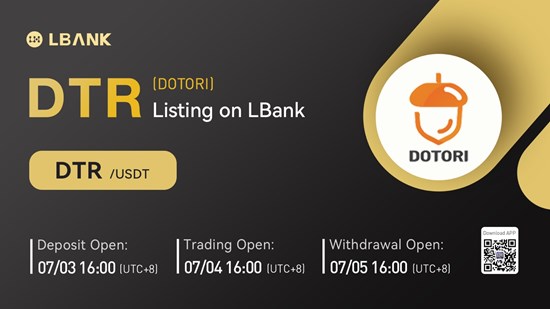 As one of South Korea’s best-known SNS platforms, Cyworld launched a cryptocurrency called DOTORI (DTR) so that it can be used throughout its mobile SNS service and metaverse. The DTR token has been listed on LBank Exchange at 16:00 (UTC+8) on July 4, 2022, to further expand its global reach and help it achieve its vision.

Cyworld is one of the most well-known SNS services in South Korea with 32 million users which account for 80% of the total Korean population. It’s a first generation SNS platform, the Facebook before Facebook, being one of the first services to commercially adopt the concept of metaverse, use a digital currency and also profit from the sales of virtual goods.

Cyworld introduced the idea of “Dotori”, which means acorn in Korean, as a cybercurrency, long before the current metaverse and cryptocurrency wave. Users decorated their avatars, personal pages with background music and pixelated items, using the cybercurrency purchased with real money. Cyworld at its prime generated USD 300K/day (3 million units) just from the sales of the “Dotori” alone.

Now Cyworld is developing a cryptocurrency called DOTORI (DTR) to create a global lifecycle blockchain. The DTR token is utility token that can be used throughout the mobile SNS service and metaverse as well, just as the cybercurrency ‘Dotori’ was used, only with more possibilities.

Cyworld has re-launched its mobile version (Android & iOS) on April 2, 2022 and recorded no.1 downloads in both markets. 6 million users have already re-activated their accounts and it is expected that the mass of Koreans will be re-connected with Cyworld’s mobile service. There are currently 17 billion images, 8.6 billion posts, 2 billion diary notes, 700 million background music download data, and 300 million videos in Cyworld, and the data continues to grow rapidly on a daily basis.

DOTORI (DTR) is an ERC-20 based native utility token which can be used as a common currency throughout the Cyworld platform, and users can use the “DOTORI” to purchase various digital contents in the mobile SNS service and 3D metaverse platform.