Singapore, Singapore–(Newsfile Corp. – July 7, 2022) – Community driven Web3 game company Planetarium Labs has raised a $32 million Series A funding round led by Animoca Brands and joined by Krust Universe, Wemade, and Samsung Next, laying the groundwork to lead a generation of Web3 games powered and governed by the community. 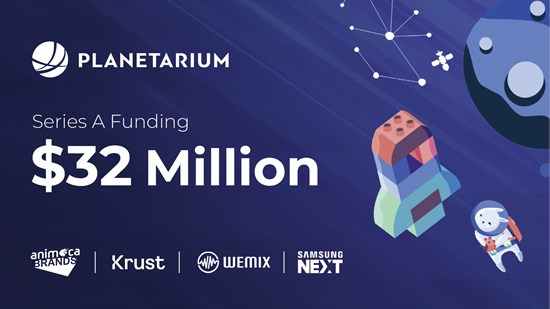 Planetarium Labs aims to become a pioneer of open-source, decentralized blockchain games that operate on networks powered by the players. The company is building a gaming ecosystem based on Libplanet blockchain technology, which allows players to participate in the game network and gives the community a chance to play a major role in open-source content development. Libplanet played a pivotal role in Nine Chronicles, the world’s first open-source online RPG running entirely on its own blockchain. Boasting a community of more than 300,000 players, Nine Chronicles has earned the support of Animoca Brands, Binance Labs, Ubisoft, and The Sandbox.

In addition to bringing in fresh capital, the investment round highlights the powerful and strategic backing that Planetarium Labs has attracted. Valued at over $5.8 billion, Animoca Brands is a global leader in gamification and blockchain with a robust and diverse investment portfolio, and with the mission to advance digital property rights and decentralized projects to help build the open metaverse.

The funding round also establishes an extensive partnership network for Planetarium Labs throughout Asia, including with Krust Universe, the investment arm of South Korean tech giant Kakao, and Wemade, global publisher of play-to-earn MMORPG MIR4 on the WEMIX platform.

Yat Siu, co-founder and executive chairman of Animoca Brands, said, “We strongly believe that the future is massive decentralized worlds in an open metaverse, which is why we are delighted to support Planetarium Labs’ vision of community-centric blockchain games that empower players with creative freedom and full digital rights.”

Planetarium Labs will allocate the infusion of funds to build out fundamental tools for community-driven gaming and player governance while enabling key studios to deliver increasingly sophisticated Web3 gaming experiences. The company plans to focus on continuously improving the Libplanet ecosystem for decentralized gaming, and introduce several initiatives like ecosystem fund and community support programs to foster participation and drive continued growth.

JC Kim and Kijun Seo, Co-CEOs of Planetarium Labs, said, “The future of gaming is moving in a direction where the players and the community collaborate on…