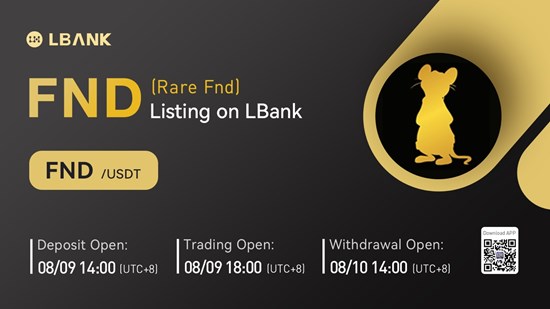 As the only crowdfunding platform that pays the user to start their fundraising journey, Rare Fnd (FND) utilizes the power of blockchain technology and cryptocurrency to ensure that the innovators around the world are given the best opportunity to make their ideas a success. Its native token FND will be listed on LBank Exchange at 18:00 (UTC+8) on August 9, 2022, to further expand its global reach and help it achieve its vision.

Rare Fnd is the first and only platform to offer a cryptocurrency based fundraising program that enables users to participate in crowdfunding with the speed and flexibility of crypto. Not only does Rare Fnd help charities and startups reach their full potential quicker, but it also ensures that all donors and contributors are rewarded even in the unlikely event that the crowdfunding campaign was unsuccessful.

It’s not only free to fundraise, but the Rare Fnd will also help users meet their goals. It’s currently offering campaigns 10% toward their fundraising targets, meaning it’s paying users to launch their fundraising campaigns on Rare Fnd platform, and furthermore, helps them reach their targets quicker with 240% APY on all contributions.

Contribution rewards can be delivered in minutes, not months using its revolutionary NFT fractionalization and steganography technology – a first in the cryptocurrency and crowdfunding space. User’s incentives for contribution tiers are embedded in an NFT which can be bought, sold, traded or used. From event tickets to gift cards – it’s easy to deliver. No complications or expense of shipping items which allows users to better fund their projects and opens up the usefulness of the reward to a worldwide audience. And as a true end to end crowdfunding solution, Rare Fnd offers fiat based payments as well using credit and debit cards.

In addition, all of the contributions by investors in a campaign are autostaked in Rare Fnd platform. This provides the ultimate in safety for the contributors due to the fact that if a campaign fails to reach its fundraising goal, the funds are returned to the contributor plus any staking rewards that were earned during the campaign.

With key partnerships to be announced with some of the leading names in the industry across the charity space, Rare Fnd aims to ensure that the innovators around the world are given the best opportunity to make their ideas a success.

FND is the native token of the Rare Fnd platform. Using FND as the fundraising token, Rare Fnd is able to help…