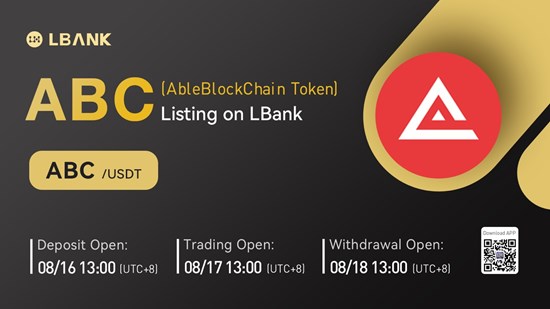 As a private blockchain based on Ethereum, AbleBlockChain aims to become the most powerful blockchain mainnet that enhances convenience, speed, and security while being compatible with crypto. Its native token AbleBlockChain Token (ABC) will be listed on LBank Exchange at 13:00 (UTC+8) on August 17, 2022, to further expand its global reach and help it achieve its vision.

AbleBlockChain is a private blockchain based on Ethereum, and it is a blockchain for enterprises with authorized participants which can participate in and create blocks.

As a Proof of Authority (POA) enterprise network, AbleBlockChain can operate smart contracts and DApps (Decentralized Applications) as well as functions of cryptocurrency. Developers can build a variety of DApps on it, and the built DApps have the characteristics of anonymity, statelessness, decentralization, and decentralization of AbleBlockChain. In addition, DApp developers can build in the mainnet environment after undergoing tests and verification procedures in the testnet environment, which is the same environment as the AbleBlockChain mainnet.

AbleBlockChain mainnet and its ABC token are developed with the focus in building a marketing platform that will eventually replace the current marketing business and landscape. The team has long been integrating the burgeoning blockchain system with that of a marketing platform.

As time passes and progress is made through the team’s research and development, the foundation is planning to launch a powerful marketing platform that will impact the marketing industry by offering a marketing strategy that both benefits an entity engaging in a marketing campaign as well as the customers who would be exposed to that campaign.

ABC tokens are designed to provide additional utility and conveniences to users for adopting new way of paying for AbleBlockChain’s goods and services. Based on BEP-20, ABC has a total supply of 10 billion (i.e. 10,000,000,000) tokens, of which 75% is provided for the ecosystem, 11.5% is provided for token…