Dubai, United Arab Emirates–(Newsfile Corp. – August 18, 2022) – Wemade’s CEO Henry Chang made his first media appearance in the Middle East during a live interview on “Bursat Al Alam” on CNBC Arabia. Mr. Chang spoke about Wemade’s transition from a traditional game developer into the blockchain gaming sector. Mr. Chang’s visit to Dubai, UAE marks the beginning of the company’s expansion in the region. 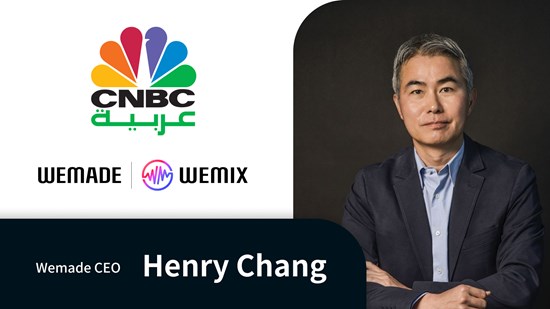 CNBC Arabia is an Arab worldwide financial and business information channel broadcasting 24 hours a day. The channel reaches 50 million households and is free to air in the Middle East and North Africa. With the live and instantaneous translation in Arabic, they provide in-depth and up-to-the-minute coverage of regional and international affairs (Europe & US).

Mr. Chang was invited to the show because of his status as a pioneer in the global blockchain gaming industry. He joined Wemade back in 2013 and took over as CEO in 2014. He also accumulated over 26 years of professional experience so far. Mr. Chang has invested heavily in developing Wemix’s blockchain ecosystem these past few years, which led the firm to position itself as a dominant player in the space.

Wemade’s most globally recognized IP, the Legend of Mir series, has achieved great success globally including in the Middle East. By partnering with global blockchain projects, securing sponsorship opportunities, and investing in the ecosystem, Wemade is actively cementing its leading position in not only the traditional game industry but also as a publicly traded blockchain game company.

The media exposure Mr. Chang has received in the region is not only indicative of…